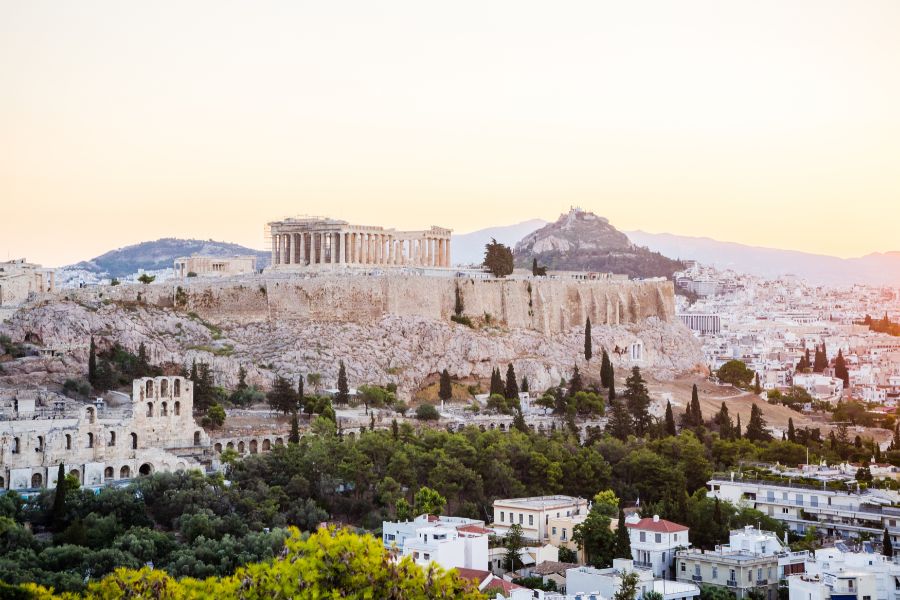 Acropolis of Athens – Its ancient buildings influence the world like no other!

Difference between Acropolis and Parthenon:

First thing first! If you’re wondering what’s the difference between Acropolis and Parthenon, then you have come to the right place. In fact, I had the same doubt before traveling to Greece.

Well, Acropolis in Greek means a city or citadel built on a high hill. Acropolis of Athens is one such site that was built some 2500 years ago in 5th century BCE.

Parthenon, on the other hand, is the most famous monument at Acropolis of Athens. The Parthenon was built as a temple dedicated to goddess Athena. The construction of The Parthenon began in 447 BC and went on until 438 BC.

I, along with my wife, and a few other friends had visited Greece in May. The weather was perfect in Athens staying mostly in 70s and 80s. We had planned our itinerary such that we had one day (almost!) in Athens just for visiting Acropolis and Plaka.  Here is the twist though: We were returning from Meteora the same day we had kept for Acropolis. Was it overkill? Yes. But we had no other choice because we wanted to save our days for Santorini and Mykonos which we were vising in the later part of our trip. And we didn’t want to miss Meteora either which we visited in the first leg of our trip.

Anyways, the day had finally arrived. After catching early morning train from Meteora, we were back in our hotel room at Centrotel in Athens. Needless to say we were tired. Our mind said hold on and rest. Our heart said move on and visit Acropolis. After all, no trip to Athens is complete without visiting Acropolis to see the Parthenon. We listened to our heart, and left the hotel room to visit the magnificent site of Acropolis of Athens. We decided to take the metro to Plaka station to get a feel of Athens and its people.

Our time at the Acropolis of Athens:

When we arrived at Plaka, it was bustling with people. We picked a good restaurant at the main square and decided to eat our lunch there. After relishing the authentic Greek food, we started our hike up to the top.

Acropolis of Athens as seen from below

There were plenty of stores along the way where we stopped multiple times for souvenir shopping and Ouzo shopping!

A few minutes into the walk, the shops disappeared, the sun came up, and we felt a little heat of the hike. Finally, we arrived at the top and bought our tickets. The tickets cost 12 Euro each. Once we entered the ticket restricted area, there were no proper shed available to prevent us from the direct sun. However, we didn’t care much because we were basking in the glory of history. (haha, pretty dramatic!)

On the right of Propylaea, there is a tiny temple know as Temple of Athena Nike! Nike means victory in Greek, and this temple celebrates Athenians victory over the Persians.

While entering, I looked back and noticed that this rich history was basking in sun’s glory

Once you get past the entrance, you’re greeted by the fascinating site of Parthenon, the most famous structure at Acropolis of Athens. From a temple, to a church, to a mosque and finally to a storage facility for Turkish gunpowder, this structure has seen it all.

Parthenon, the most famous structure at Acropolis of Athens.

Right in front of Parthenon is the Erecthion, a temple dedicated to both Athena and Poseidon. The south side of Erecthion is called “Porch of the Maidens” where you find six female figures acting as supporting columns.

Porch of the Maidens at Erecthion

On the north side of Erecthion, there is large porch with six Ionic columns.

On the east side of Erecthion, there are another six Ionic columns.

View of Athens from Acropolis. Temple of Olympian Zeus can also be seen in this picture.

On the southern slopes of the Acropolis, there is a stone theater known as ‘Odeon of Herodes Atticus’ . It is still used for classical performances.

Where did we stay in Athens:

In Athens, we stayed at Centrotel hotel for 3 nights. The reason we chose Centrotel over any other hotel near Acropolis/Plaka is because of the following reasons:

Please note that we traveled to Greece in the shoulder season of May. Therefore, the room price may vary depending on your travel dates and availability.

If you’re not traveling to Meteora, I would recommend staying in a hotel near by Acropolis/Plaka.

The feeling of visiting the Acropolis of Athens, a historical place that has influenced the world like no other, can not be described in words, it can only be experienced.

No comments to show.